IS THE RAND NEAR ITS FAIR VALUE?

In the middle of the last month we saw perfect example of how sentiment and risk appetite can have an impact on the currency. We have often made mention that the large moves within the Rand are generally not because of the many own goals that our government manages to score but rather due to global economic factors.

The Rand strengthened by 3% in the middle of September to its best level over the last 6 months driven by renewed hope that a viable vaccine was in development for Covid-19. Just a week later those gains were reversed as it was clear that the European nations were struggling to deal with a second wave of the virus. Both events were unrelated to South Africa and yet the gain and the reversal thereof were both swift. What we did see though, was when the currency strengthened there was renewed interest in taking money offshore which does raise the question as to whether the Rand was viewed as being at a reasonable level at this stage.

In this month’s Financial View we try put our best view forward on the current position of the Rand. We often say that forecasting the currency is mug’s game as the moves are mainly driven by sentiment, something that can be influenced by many factors besides economics.

In a recent note to their clients the strategists of Goldman Sachs ranked the Rand as the second most attractive emerging market currency pick. They described the Rand as being “deeply undervalued” in their note. They did highlight the domestic headwinds that the Rand faces (mainly political in nature) but feel that our close relationship to China and thus our sensitivity to the recovering Chinese economy is a positive. This allowed Goldman Sachs to upgrade their forecast for the Rand to hit R15.75 to the $ by year end.

The Rand is often at the forefront of emerging market sentiment as South Africa has well developed and robust financial markets and the currency is easily tradeable compared to some of our Emerging Market peers. It means that the Rand often benefits most when sentiment is positive towards EM and suffers most when the sentiment is negative. In a chart of some of the major EM currencies against the US Dollar we can see that the Rand is performing in line with other emerging markets. The currencies in the chart are the Chinese Yuan Renminbi (CNB), Brazilian Real (BRL), Indian Rupee (INR), South African Rand (ZAR), Turkish Lira (TRY), and the Russian Ruble (RUB). 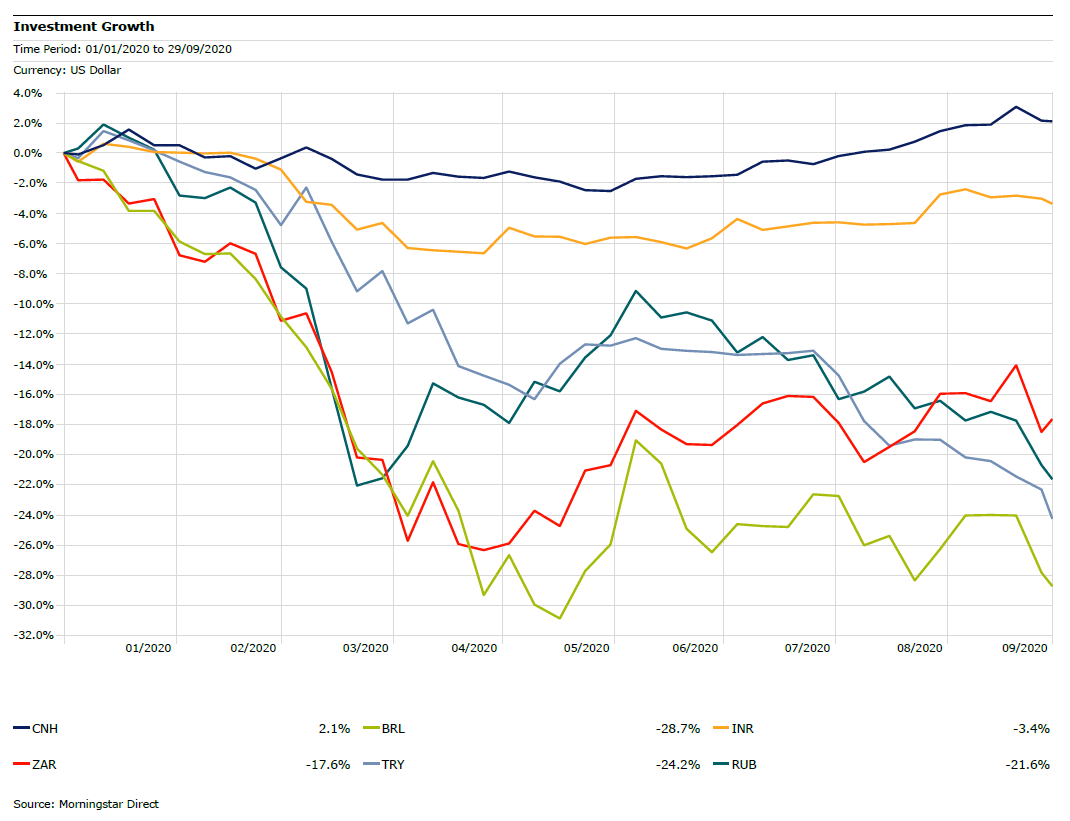 The Rand as represented by the red line sold off in the Covid crash in line with two of the other currencies but since then has outperformed the other emerging markets, baring China and India. This is in a period where we had the downgrade of our sovereign debt and a downward revision to our debt to GDP forecasts. The one positive for South Africa is that relative to other nations we seem to have handled the pandemic well, which means we should remain one of the more attractive EM investment options.

Way back in April 2016 we explored the Big Mac index in depth. The Big Mac Index was introduced by The Economist in 1986 as a semi-humourous demonstration of Purchasing Power Parity. The Economist has updated the index on an annual basis ever since and state that it “is a lighthearted guide to whether currencies are valued at their correct level”.

The Big Mac Index Compares the converted Dollar price for a Big Mac burger, the best-selling burger of global fast-food chain McDonalds, across 44 different countries. The Big Mac was selected as the standard unit of measurement as the burger has to meet exacting standards across the world so a Big Mac should be pretty consistent wherever you may purchase one. The raw materials of the burger are however sourced locally and are the biggest drivers of the burger’s selling price. The Big Mac has to be priced at a competitive price in the local currency otherwise sales would be low.

In their July 2020 analysis they ranked the Rand as the world’s most undervalued currency stating that it 67% undervalued based on the price of R31 for a Big Mac in South Africa and $5.71 in the United States. 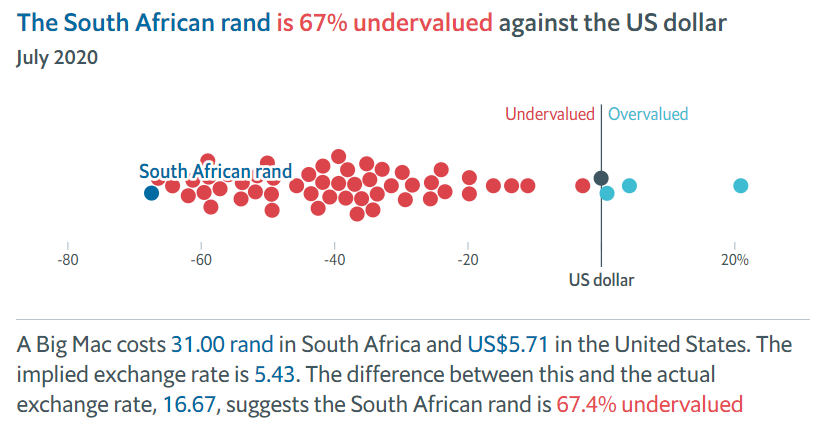 Out of interest the outlier to the right on the graph is the Swiss Franc. Big Macs cost a whopping (or is that the competition) CFR6.50 in Switzerland.

The Big Mac index has come under some criticism in the past as being too simple and ignoring certain country specific factors. The general argument is that a large component of any burger is not the raw materials but the labour cost of operating the fast-food outlet. In 2011 The Economist created an adjusted index which factors in the GDP per person. Adjusted BIG Mac Index. 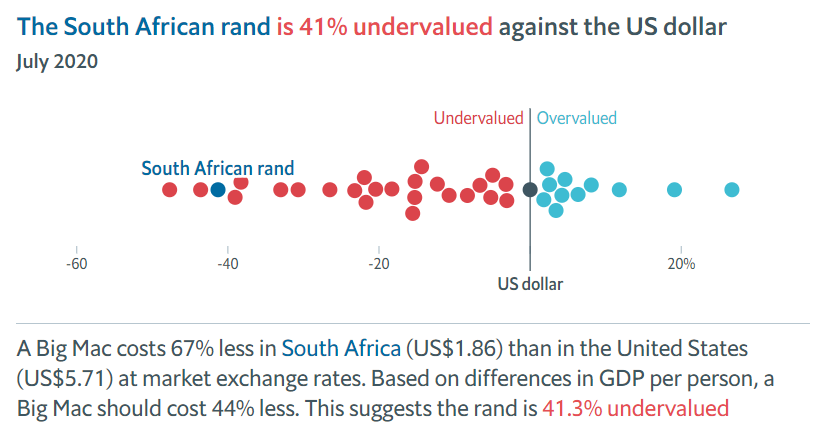 If we can ignore the scary statistic that the labour cost impact on the price of a Big Mac would reduce the cost by 44% it still results in the Rand being 41% undervalued. At the current levels that would indicate that the Rand should be around R10 to the $.

What to expect going forward

Both the experts and the burgers indicate that the Rand is certainly trading well below fair value. We agree with that assessment, but it is important to note that South Africa does represent a risky investment climate currently. There are many easy fixes but in the most part they require a political will to implement and we foresee difficulties in things like keeping public sector wages under control. In the past the government always seems to follow the populist route and avoids making the tough decisions and there is currently no indication that this is going to change. However, if the government can make the right decisions, this will result in some positive news and we should see an economic recovery and a strengthening of the Rand.

We believe that all investors need adequate exposure to offshore assets in their portfolios. This is to diversify their portfolio which will reduce the risk but also opens up investment opportunities not available within South Africa such as internet stocks and biotechnology companies. We all learn from a young age never to put all your eggs into one basket and that is what one is effectively doing by only investing in South African assets. Fortunately, many companies listed on the JSE actually earn their income globally so even a portfolio of South African shares will still give you some limited offshore exposure.