Investors in the local JSE have been left battered and bruised over the past few years as the stock market and Equities as an asset class have delivered no significant returns. The tepid return environment has got many investors frantically searching for the exit doors as they try to switch to asset classes that provide higher and more stable returns. Cash and near cash investments have been the recipients of large flows of money as investors prefer the certainty of “each month I receive my interest”. Unfortunately, this is one of the most value destroying decisions that an investor can make. In this month’s Financial View, we look at why Equities remain your best creator of long-term wealth.

Every investor should definitely be feeling jade currently. There has never been a worse time to be invested in the local stock market. For the first time in close to 50 years investors lost money over a rolling 5 year period. In short if someone had invested in March 2015, they were worse off 5 years later. These returns are measured on the JSE Total Return All Share Index so includes dividends and any other income that the investor may have received and yet they were worse off. 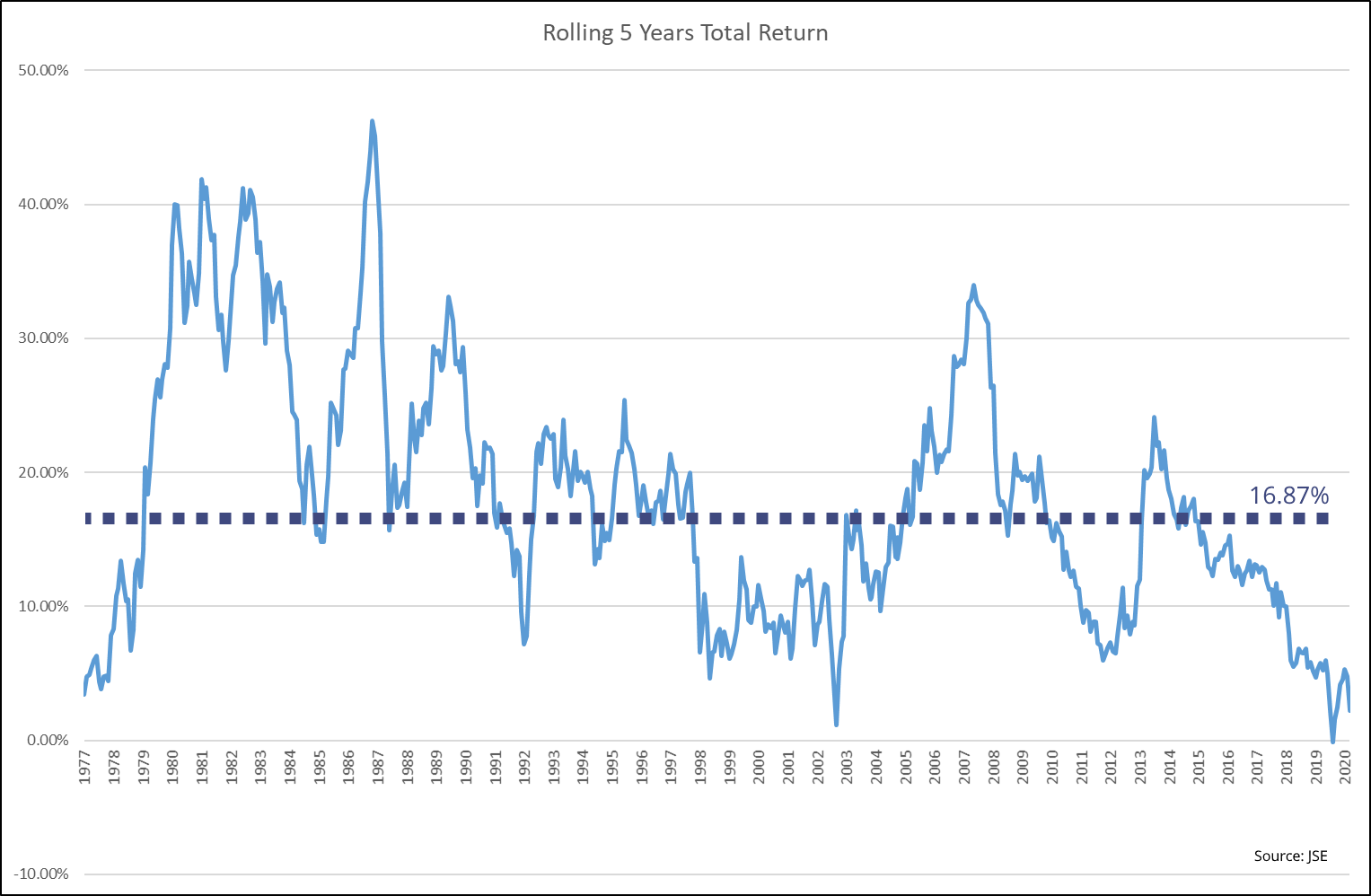 History however teaches us that the market moves in cycles. There are two large drivers of share prices in the market. The first and easiest to explain is that share prices are a function of the earnings that the company produces. The share price represents how much you are willing to pay to have an ownership right over those future earnings. But that sentence in its own does not fully explain the second and more difficult to predict driver of share prices. The fact that it is based on “how much the investor is willing to pay” means that sentiment of the investor has an equal affect determining the value of share prices. The sentiment of the investor is influenced by their perception of the Economy, the state of the Country and the investors personal circumstances. When sentiment is negative it weighs on the value of the shares and when sentiment is positive it lifts the share prices. More often than not sentiment is what creates the market cycles. The negative sentiment of investors moving their funds into cash investments in itself becomes a self-fulfilling prophecy as that then extends the downturn for equities. Foreigners withdrawing their money is another factor as is local investors preferring to take their funds offshore and investing there.

The Investment Case for Local Equities

We have seen that the current environment is the worst it has been in a long time. The negative rolling 5 year return is currently sitting far below of the long-term average of 16.87%. Whilst we feel that the long-term average will come down as inflation is currently lower than for most of the data set one still expects a long term average for equities of around inflation plus 7% which would be low double digit returns in the low-inflation environment that we are in at the moment.

The fact that negative sentiment is weighing on prices currently means that there is value to be found within equity investments. Value is often the driver of the change in sentiment – when share prices become too cheap to ignore, when they are at bargain basement prices, investors will start to buy. We have seen this play out before, after every stock market crash, there comes a time when prices are so low, they cannot be ignored. This is where the stock market recovers from the crash and then continues on to higher levels.

The following chart is on a logarithmic scale and demonstrates the move in the JSE since 1965 (a data set of 65 years) and one can quite clearly see the slow down or flattening of the graph since 2015 – in fact a period like no other on the graph. All the market crashes and their subsequent recovery have been marked with the red dotted lines. 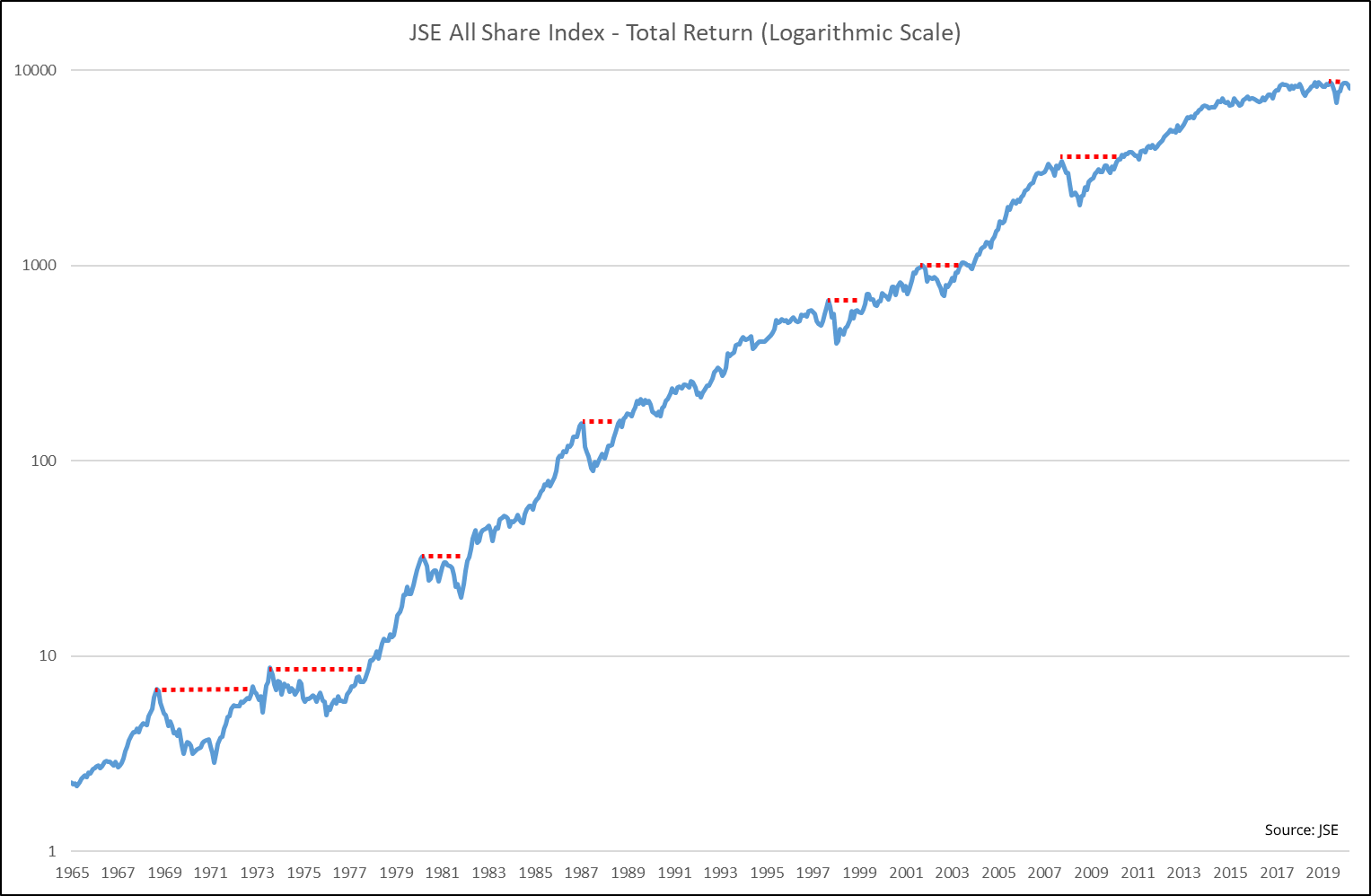 The stock market cycles are clearly distinguished by their subsequent recovery. Even the crash in 2008 which was the most violent in the history of South Africa saw recovery in less than 2 years. In fact, anyone who had invested at the top just before that crash still made 9% per year over the next 5 years, including the huge negative impact of the loss on their portfolio at its inception.

The other thing to note on the chart is that the chart starts bottom left corner and ends top right corner. Over the long-term investors haven’t had anything to worry about with a 3 515% increase in their investment over 65 years. R10 000 invested in 1965 is now worth in excess of R36m – that is real investment return.

At Magwitch we firmly believe that human behaviour makes us all emotionally bad investors. We tend to focus on the short term and not look at the big picture. Whether you are saving for retirement or trying to generate wealth you will not reach your goals without adequate exposure to equities – the asset class with the best growth engine.