WHAT DOES THE BUSINESS CONFIDENCE INDEX TELL US?

When assessing the current statement of any economy and by extension the country there are many statistics that are based on cold, hard data. But whilst these statistics paint a picture what is it that they aren’t telling us? Often one needs to also understand the perceptions and opinions out there. To help us get the complete picture there are also a lot of statistics based on surveys, how people answer questions determines the statistical results. In this month’s Financial View we look at the Business Confidence Indices (there are two) of South Africa.

The business confidence index is created as a result of responses from a periodical survey sent to a number of business executives across set sectors such as building, trade and manufacturing.  As the Bureau for Economic Research summarises it, “The business survey questionnaire contains a small number of questions. These questions are qualitative in nature, e.g. “Compared to the same quarter a year ago, are the volume of sales up, the same or down?” No figures are requested.”  Ultimately what these questions boil down to are is a survey of business executives answering one overriding question “Do you find prevailing business conditions satisfactory or unsatisfactory?”

As one can appreciate business confidence is a good gauge of what the mood is in the country and what is expected to happen to the economy in the future.  If a company expects to sell more products in the next year it is likely that the economy is vibrant.  If a company is not confident or uncertain about the future then they will not make any significant investment and the economy will shrink just as a result of the reticence to increase product.  When businesses are confident, we are confident.

The older of the two indices in the RMB / Bureau for Economic Research (“RMB/BER”) Business Confidence Index.  They have been surveying businesses since 1954 and commenced the current index in 1975.  So now it has almost half a century of opinions from our market leaders.  The RMB/BER index is based on a quarterly survey, and they release an overall percentage each quarter. 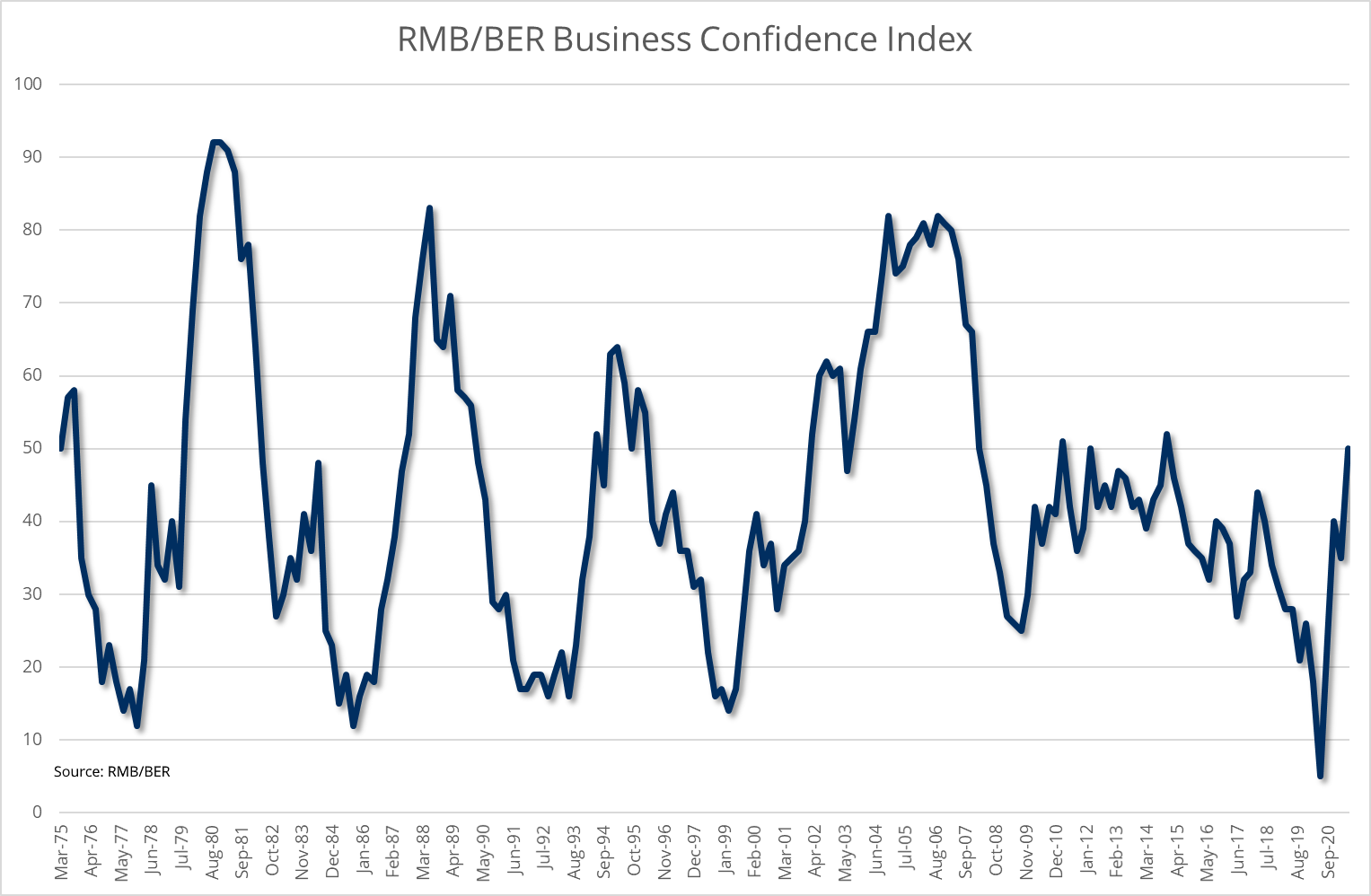 The early part of this century (just before the Zuma years) was the last time where we saw sustained business confidence. Cast your mind back to those years and we had Government under Thabo Mbeki with Trevor Manuel as his finance minister working closely with business.  We saw periods of high GDP growth, a reduction in the debt level of the country, high demand for property and the euphoria of preparing for the soccer world cup.  The end of that period tied in with the GFC financial crisis which in part could possibly have been a factor in the election of Jacob Zuma as the ANC president in Polokwane, guaranteeing his place at the head of our country.

The “lost decade” as defined in the press of Zuma’s leadership also comes through in the survey.  Throughout that period we never saw a sustained phase where business was confident.  There was a clear trend down with even the period of “Ramaphoria” leading to a small spike in 2018 when still the majority of business was negative.  This continued all the way to the Covid lockdown which was the lowest result recorded in the history of the survey.  In the 2nd quarter of 2020 only 5% of businesses felt confident.

The SACCI Business Confidence Index also has a long history tracing its start back to 1985.  Their surveys are conducted monthly, and they rely more on statistical data and economic indicators.  The data has been rebased to 100 for the 2015 year and a move down is worsening of confidence and a trend up is improving confidence. 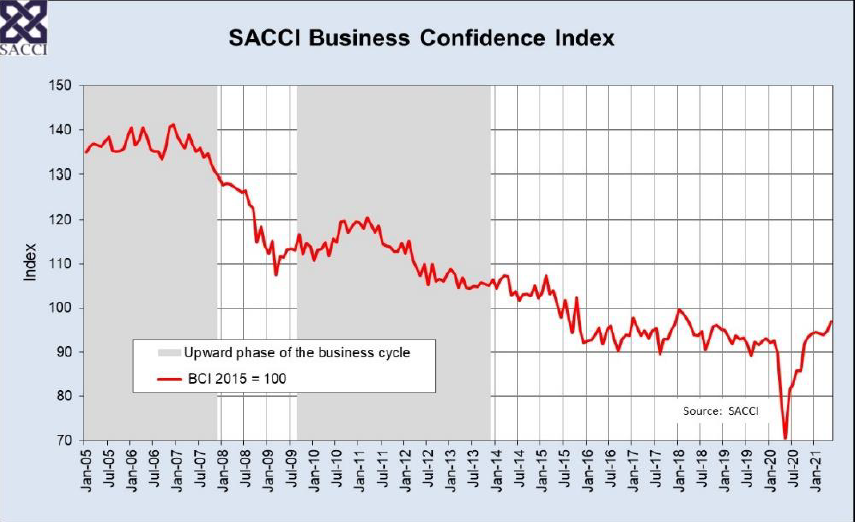 In their latest report they have started the data from 2005.  As one can see there is the same trend down without any relief before the huge drop as a result of the Covid lockdown.  The SACCI Business Confidence Index indicates that business is far more confident than it was pre-Covid but nowhere near as confident as in 2006 which matches our expectations.

A look into some of the data points that come together for the SACCI Business Confidence Index highlights exactly where we are.  For each data point the long-term trend average has been rebased to 100.

What we can see is that exports are really up as a result of the current cycle of high demand for commodity which has fuelled higher prices and record profits for this sector.  The increase in commodity prices has helped exports and kept the current account positive, resulting in a Rand that has strengthened despite structural issues within the country and moments where Government has found to be lacking.

The passing of building plans is also up and we know that a low interest rate is positive for building.  The working from home trend has accelerated people doing home construction.  Just don’t speak to the property companies owning their empty offices.

For the rest we are still seeing trends below their long-term averages with the value of the JSE indicating that the JSE may be offering value and that there may be some opportunity.

How do we interpret the separate business confidence indices?

Both graphs presented tell us the same story overall.  Business is feeling a lot more confident than a year ago but we are nowhere near the point where we are seeing a large level of confidence from business where they would be happy to invest into new projects and new job opportunities.  The growth in our GDP looks likely to remain muted and that we do not expect to see that exuberant growth that we saw at the start of the century for a while.

Although the above graphs do not reflect the recent looting and violence, these scenes that have been projected all over the world certainly did us no favours and can be viewed as extremely negative, hopefully this will be one of our lowest points we have reached as a country.

The government needs to reassure the public and accept that the private sector has the means and the ability to create jobs and to invest in new projects, but they will not deploy any capital if they are not confident of getting results. Certainty around power supply, certainty around property ownership and security of assets are obvious things for the government needs to sort out in order to reassure investors and the public at large.  What they need to do is create the right environment for business to flourish through the amendment to existing policy and we will see an economy growing where jobs are created and there is an economic upliftment of everyone.  Fortunately, the positive news of the last few months, especially the opening up of the power generation on a small scale, is a step in the right direction.  Now we need to add a lot more positive steps to build confidence.