SHOULD WE BE CONCERNED ABOUT INFLATION?

Inflation is a very hot topic at the moment with concerns over inflation causing bond yields to spike worldwide. They say that popular culture focuses on the stock market, but Wall Street keeps its eyes on the bonds. There is a general consensus that the bond market is the best gauge of the state of the economy and for this reason many stock traders look to the bond market to make predictions. In this month’s Financial View, we look at how inflation feeds through to the bond market and whether we should be watching out for inflation locally in South Africa.

As defined by Investopedia – Inflation is the decline of purchasing power of a given currency over time. The most common indicator of inflation is the calculation of how much a basket of goods costs, calculated on a monthly basis. Inflation is then expressed as a difference between the cost of the same basket of goods a year prior. In South Africa we have the Consumer Price Index that calculates this and includes such inputs as food, petrol, housing, electricity, education, and health care amongst others.

Inflation can thus be said to be the result of the move of the price of the basket of goods. There are a number of things that can influence prices within the basket but the simplest view is to think of supply and demand as taught in all Economics 101 text books. If there is more supply than demand the price of an object will fall, whilst if there is more demand than supply the price will increase. Anyone that collects / drinks wine would be able to confirm this as the Day-Zero droughts of 2017/2018 caused an increase in the price of wine. Quite simply smaller harvests (the worst in 50 years) meant less bottles filled, and less bottles available to the same size market. Those wine collectors / drinkers had to pay more to get their vino because of the lower quantities available – if they didn’t pay the higher price there were others that would take their place and be prepared to pay it.

The wine example is maybe something that is beyond the control of humans but we saw similar things with the Covid pandemic. Job pressures and hard lockdowns meant that a larger percentage of the population had either less disposable income or couldn’t spend it anywhere and with the reduction in demand inflation has been contained over the last 12 months (in this instance the oil price would be another good example).

The Developed World Response to the Pandemic

The developed world with strong economies and strong currencies had a few more tools in their toolbox to try and avoid an economic depression as a result of the Covid pandemic. The common response to the pandemic was for Central Banks to just print more and more money. A scary statistic is 20% of all US Dollars in circulation were printed in 2020 alone. In addition to bailout money the US Government printed, it also increased pay-outs for the unemployed meaning that US disposable income rose at its’ fastest rate in decades, much of which went unspent.

It is clear to see the very measures taken to avoid a depression cause their own problems and have their own knock-on effect on the economy. The first is that, logic says that by increasing the amount of Dollars in circulation the value of the Dollar will ultimately reduce (bigger supply). Once again, we can apply the economics calculation, with the increase in supply there will be a decrease in value as the currency is no longer a scarce resource (well less scarce). The second factor is that there is a lot of pent-up spending power. American citizens are richer now than they were before the crash and once the economy opens up all that spending power will return to sectors such as travel and hospitality causing a huge surge in demand.

The bond markets thus appear to be right in their assessment that inflation and rising prices are around the corner – no matter what the politicians may say.

South Africa was in the unfortunate position (all of our own doing through our poor economic policies) of entering the pandemic already in the midst of a recession. The pandemic really narrowed options available to the government to prevent mass unemployment and to keep the economy on a steady trajectory. Whilst there was talk of additional budget being allocated to social grants it proved to just be that – talk. Often reality differs vastly to the picture the politician paints.

So, the only meaningful measure that the SA Government did during Covid was to dramatically cut interest rates. They did this by reducing the repurchase (Repo) rate which is the interest rate that the South African Reserve Bank charges on monies it lends to all the commercial banks such as Standard Bank, ABSA, First Rand, etc. The repo rate is a critical tool that the Reserve Bank uses to achieve its goal of inflation targeting. The Reserve Bank’s mandate is to keep annual inflation between 3% and 6%. They do so by adjusting the monetary supply and as a result this feeds through to the inflation rate. Higher interest rates result in less disposable income, bringing down the demand side down of the inflation equation. Lower interest rates stimulate growth as consumers and companies have more disposable income, increasing demand. 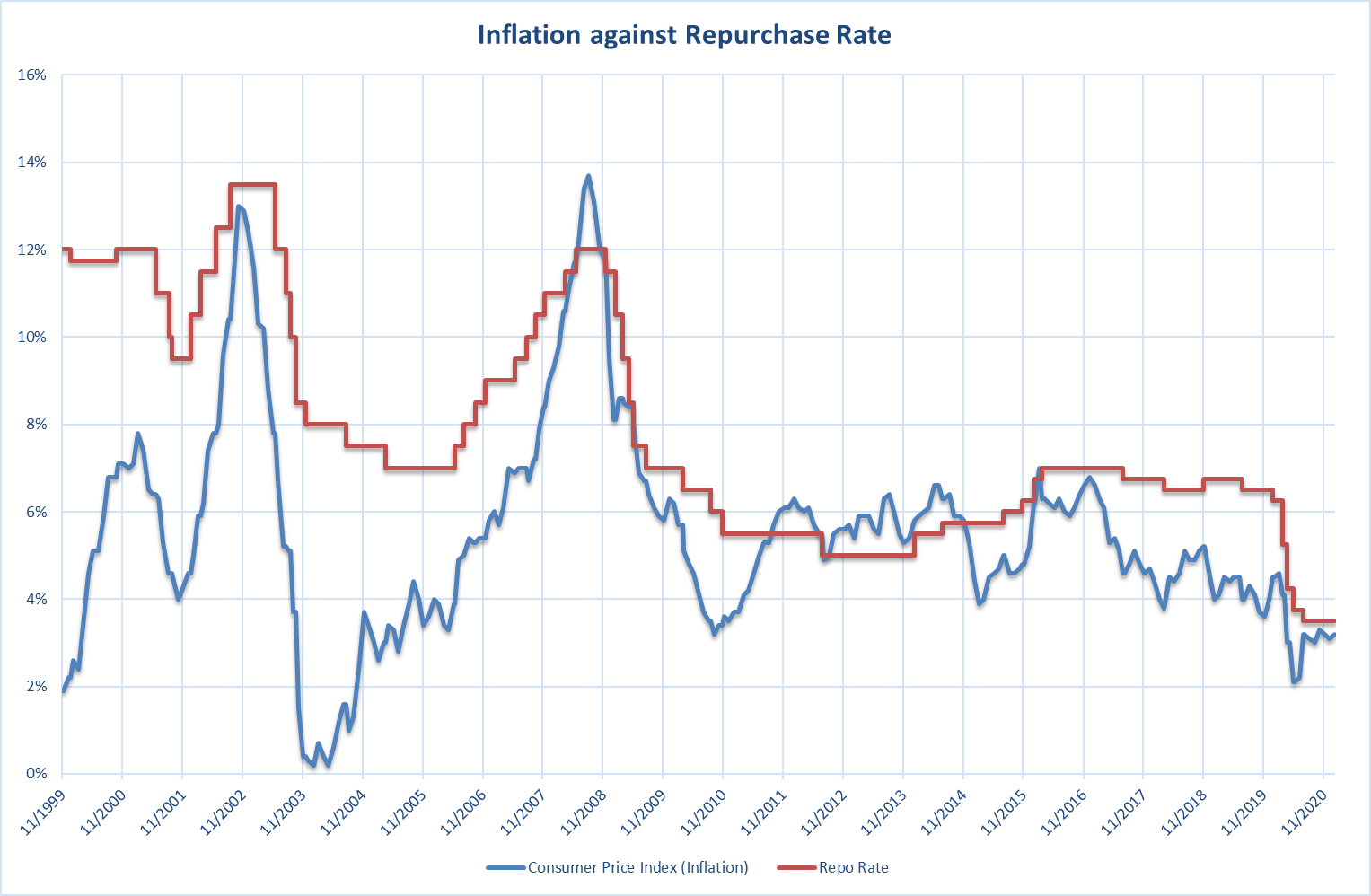 In 2020 we saw a significant reduction in the repo rate with a small decrease in inflation. Inflation was under control because of the huge drop in the price of oil due to the market crash, the Lockdowns implements throughout the world – preventing global travel – and restrictions on global trade. These factors gave the Reserve Bank the opportunity to move the repo rate down to its lowest point stimulating the economy. Despite the poor economy in South Africa the low interest rate is having a positive impact as the banks all are reporting good growth in their mortgage books – the consumer is taking advantage of this low interest rate.

The problem we have in South Africa though is that there are cost pressures that will feed through into our inflation figure, some of the main ones:

The above factors all indicate to us that CPI will start to increase again in South Africa in the near future, the only brakes on a rapid increase in inflation being the fact that unlike the rest of the world South Africans are definitely poorer than they were 12 months ago. There is certainly not the pent-up monetary supply like the rest of the developed world.

The only response the Government will have to increasing inflation is to once again hike interest rates. The question is, can our fragile economy handle a large increase in interest rates?

How does one protect an investment portfolio against inflation?

Fortunately, most asset classes are currently delivering real returns (returns ahead of inflation), the most important thing is to ensure that you have a well-diversified portfolio. We often harp on about diversification but it is truly your own free lunch when investing.

You need to ensure that you have appropriate exposure to offshore assets as they will protect against country specific weakness. Equities are also important asset class both locally and internationally, as they are your best hedge against inflation over the long term – companies can adjust their selling price in response to increases in their costs and pass these onto the consumer. Over time gold, commodities and other real assets such as property will also ultimately protect your buying power.

We always advise our clients to understand what they are invested in and what the drivers of returns are.

Perhaps a last word on Eskom. They have a clear monopoly on electricity generation within this country but without the protection of Government they wouldn’t last very long.
In the real world they would have to cut expenditure and sell assets to remain a going concern, they would not be able to pass their inefficiencies onto the consumer. Imagine a private company in these economic times, trying to increase their selling price by 15% – customers would simply just move their business to the closest competitor.