One could say that investing is our passion and it shines through in how we approach the long- term generation of wealth. One often hears that investing is not a one-day game and to further extend that analogy you can equate your investments to a cricket test match. You need to do the basics correctly at all time, but also be able to take advantage of the opportunities when they arise. Fortunately for all of us the basics of investing is actually very simple. Humans tend to complicate a very simple thing with bad emotions and poor decisions at the wrong time. The biggest advantage you have when investing is “time” and that unfortunately it is what we can ruin by making the wrong decisions. In this month’s Financial View we look at how “time” can create genuine wealth.

Investment professionals often state that “time in the market is more important than timing the market”. Many people may be under the misconception that to generate wealth it is important to do short term trading, turning a profit at every stage and outperform the market. Over the years we have explained in our newsletters how this is actually very difficult to do and chopping and changing a portfolio tends to lead to value destruction. Investment professionals do not chop and change, and they tend to hold the same positions for a long time to take advantage of the most powerful force in the investment universe – THE POWER OF COMPOUNDING.

In order to demonstrate this, we will use an example of three people A, B & C. They all start working on the same day at age 25. They will all retire in 40 years, but they each approach their investments differently.
• A invests R1 000 per month for the first 10 years (R120 000 invested) then makes no further contributions to their investment.
• B only starts investing after 10 years have passed but then contributes R1 000 per month for the remaining 30 years (R360 000 invested).
• C starts really late after missing the first 20 years. They realise that they are in trouble so they put a larger amount of R5 000 per month for the final 20 years (R1 200 000 invested).
The investments all receive a return of 11% over the period of investing. Which approach would produce the best result be at the end of 40 years, the result may surprise you? 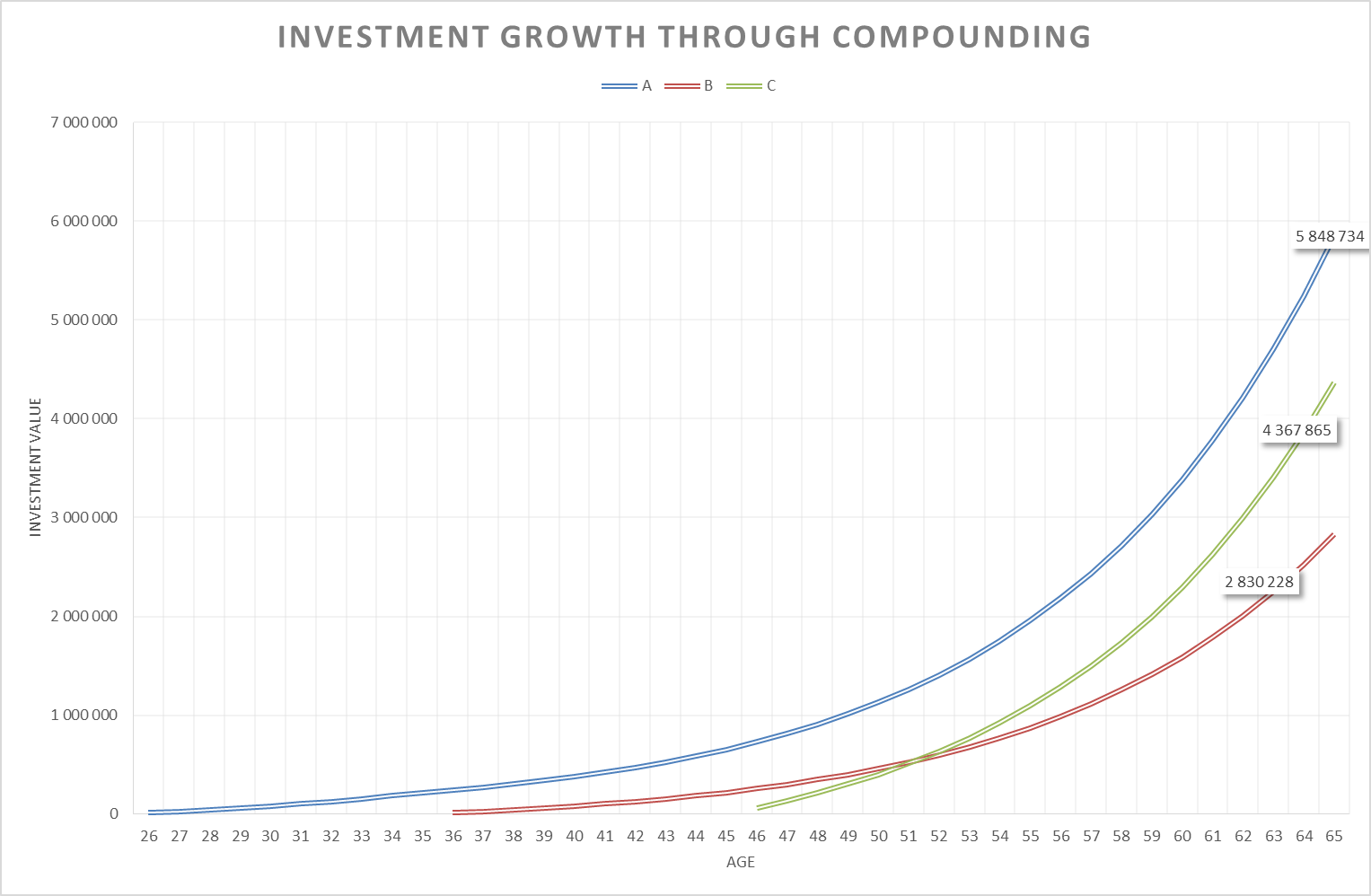 A who contributed the least has the highest value at the end of the 40 years. They have turned R120 000 into R5.85m – or grown their money by close to 50 times. Now that is how you generate wealth!

Whilst A may seem to have been successful, A in fact actually messed up – as they stopped making their contribution. A’s final number would have been R8.7m if they had contributed R1 000 each month over the full 40 year period. A small decision that cost them R2.8m…

Another thing to note in the above example is that the contributions are fixed, month to month and year to year, whilst the investor is adding to their investment. In practice one can increase your contributions each year in line with any increases in your income or to keep up with inflation.

The rule of 72 is a shortcut that we often use in finance. It allows us to quickly calculate how quickly an investment will double in value given its rate of return. You divide the number 72 by the annual investment return and the resulting answer is a reliable estimate for the doubling time.

Thus, if you had an investment return of 12% per annum it would take 6 years to double. Something more conservative such as cash delivering 6% per annum would take twice as long ie 12 years to double in value. Time to double is worth focusing on because doubling is exponential (compound) growth. If a young person has an investment returning 12% per annum they will double their investment within 6 years. At 12 years they would have double the value again which is four times the original investment. After 18 years they would be at eight times. After 24 years at sixteen times. After 30 years it starts to really deliver as the value would now be thirty-two times the original amount. If we look further ahead an investment returning 12% per annum held for 48 years would end up with a value 256 times greater than the original amount. An investment of R10 000 today would be worth R2 560 000 in 48 years time.

The rule of 72 is a simplistic calculation and doesn’t take into account any contributions – once again it is easy to even outperform these incredible numbers just by making regular contributions to your investments.

You do however benefit in that any income earned on your Tax-Free Savings Account is not subject to tax. The Tax-Free Savings Account is ideal for anyone that is already making ample contributions towards their retirement. They are preferable to all other investments (besides retirement savings) as the tax saved avoids erosion of the investment. Whatever you save in tax will result in your additional growth in your investment.

Warren Buffett is often seen to be the world’s best investor. He is constantly in the top 5 wealthiest individuals in the world, but what differentiates him from the likes of Elon Musk, Jeff Bizos and Bill Gates is that Buffett never built a factory from scratch, never designed a product, was never seen as an innovator – he made all his money purely through buying businesses at the right time. He is a born investor and he purchased his first shares at the age of 11. His only regret – that he didn’t start earlier!

It is incredible how powerful “time” is in your investment. The longer you can continue to invest and enjoy the power of compound interest the greater your final investment value.

We see investors pausing or withdrawing their investments for a number of reasons, but it is exactly this type of behaviour that sets you back on the wealth generation curve and you end up like B, bottom of the pile. Do the basics right, make sure your contributions are adequate, stick to you plan, make sure you are invested in the correct asset class and continue to do it for a long time and ultimately you will do well.